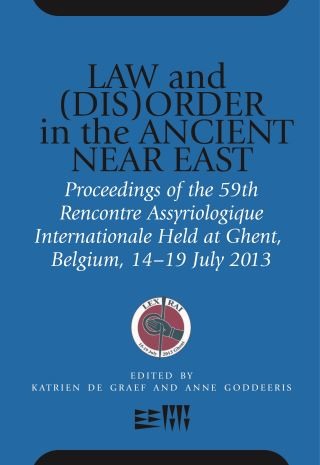 Law and (Dis)Order in the Ancient Near East

Mesopotamia is often considered to be the birthplace of law codes. In recognition of this fact and motivated by the perennial interest in the topic among Assyriologists, the 59th Rencontre Assyriologique Internationale was organized in Ghent in 2013 around the theme “Law and (Dis)Order in the Ancient Near East.” Based on papers delivered at that meeting, this volume contains twenty-six essays that focus on archaeological, philological, and historical topics related to order and chaos in the Ancient Near East.

Written by a diverse array of international scholars, the contributions to this book explore laws and legal practices in the Ur III, Old Babylonian, Middle Assyrian, and Neo-Assyrian periods in Mesopotamia, as well as in Nuzi and the Hebrew Bible. Among the subjects covered are the Code of Hammurabi, legal phraseology, the archaeological traces of the organization of community life, and biblical law. The volume also contains essays that explore the concepts of chaos/disorder and law/order in divinatory texts and literature.

Wide-ranging and cutting-edge, the essays in this collection will be of interest to Assyriologists, especially members of the International Association for Assyriology.